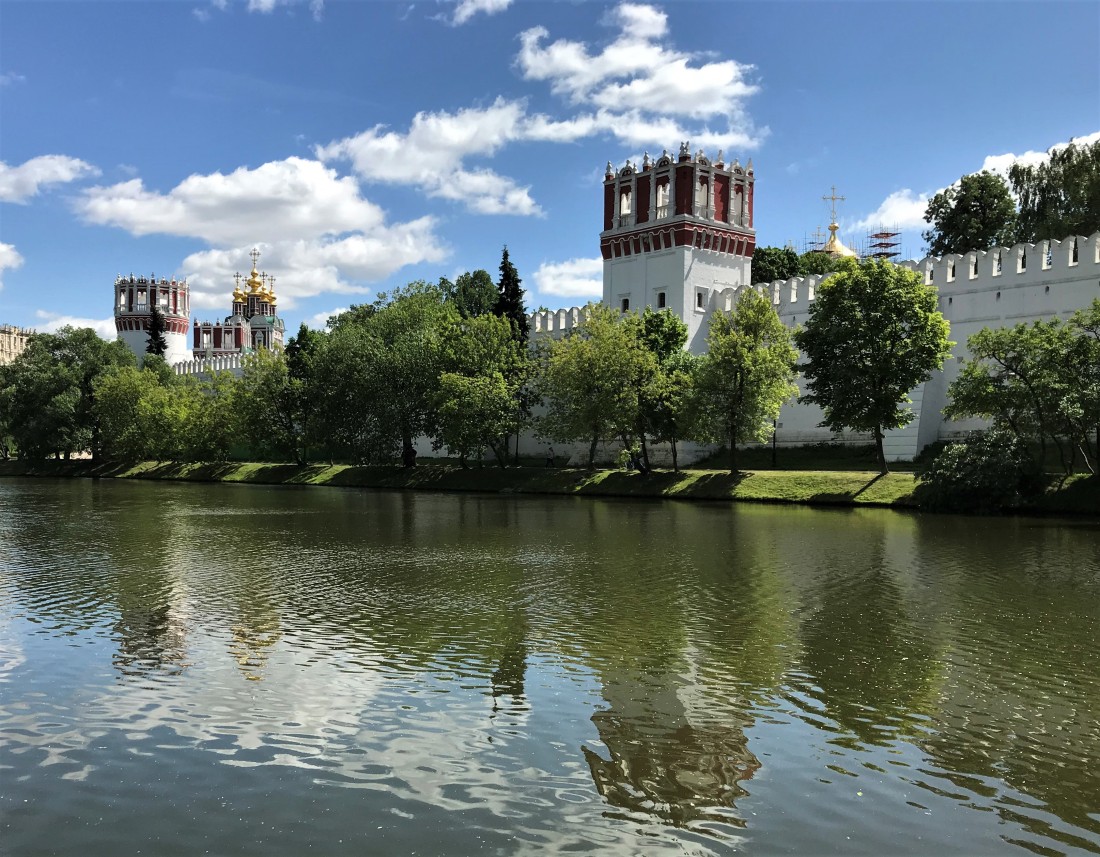 I just came to my hotel room in Moscow, wet after being surprised by a shower during my evening walk in a nearby park, next to the monastery of Novodevichi. This park has become one of my favorite spots here in Moscow. It feels good to be here, I feel a different kind of peace in my soul, something nostalgic.

I was three years old when my mother took me to Moscow to visit her aunt Rauha. I remember her holding my hand when we walked to the railway station couple of kilometers from our house in Rakvere, Estonia. In her other hand she carried a small suitcase. The road to the railway station seemed endlessly long – I was so excited to come to Moscow where I was promised to be taken to the zoo to see the elephants. I have no memories from Moscow though, I guess everything was just too big for the tiny little girl I was. Mother told me later that when we at last were standing in front of the elephants I was too tired to even look at them…

Somehow in my mixed-up little head Moscow was just behind the hill on the way to the railway station, not far from our house. When I was a bit older, I went there to see the view I remembered. I got really disappointed when I saw just the houses of our neighborhood there… 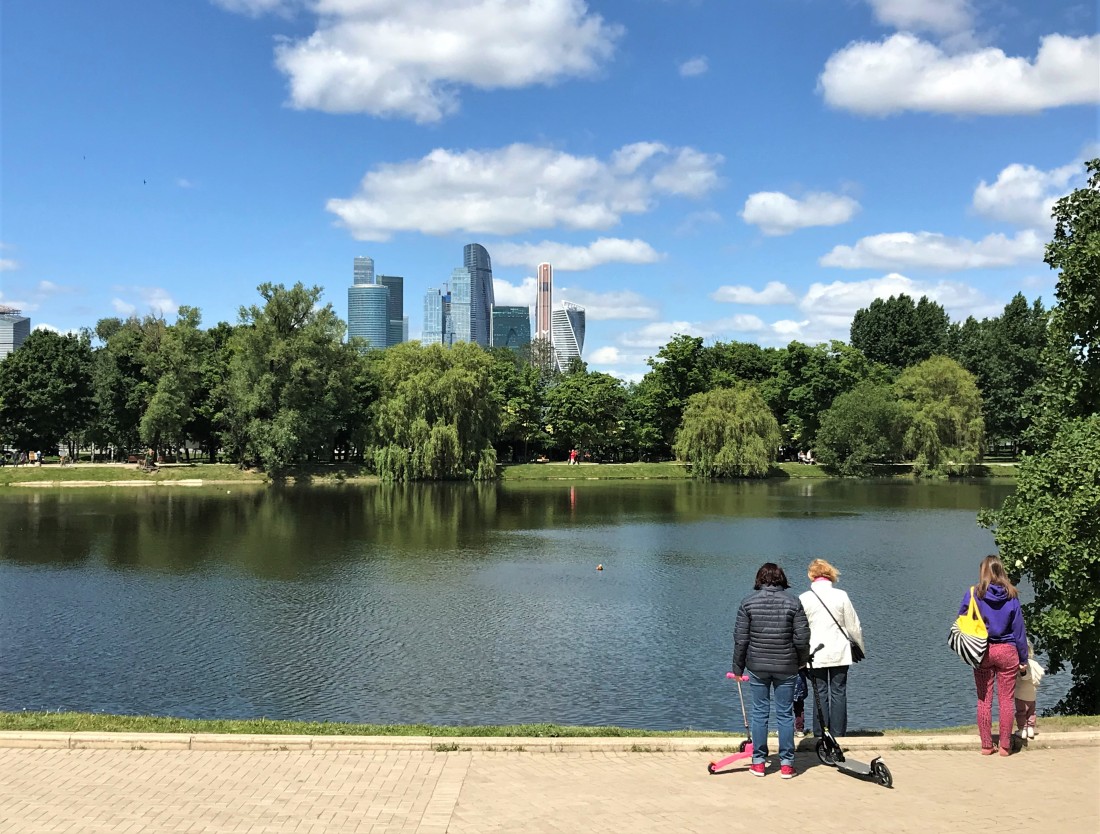 Park Novodevichi Prudy is one of the pearls of Moscow, far from the crowded city center around the Kreml and Red square. Here you hear only Russian. A group of girls with plastic champagne glasses in their hands trying to walk normally on ridiculously high heels. A babushka with a handbag scaring a big black crow away from a mallard with a tiny duckling hiding under the mother. Babushka is waiving with her bag and mumbling “you are not taking the last one from her”. Her husband says “there is no point Masha, it’s hopeless”. She tries to find something to throw on the crow. I walk away with sadness in my heart. 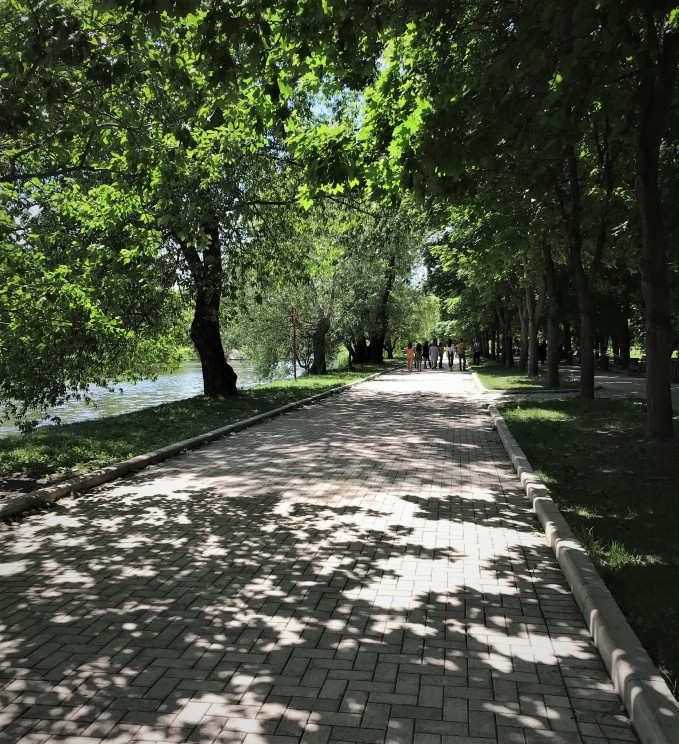 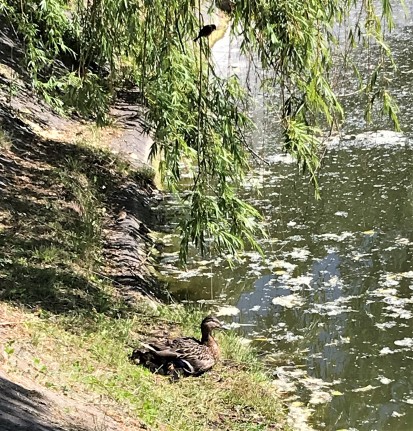 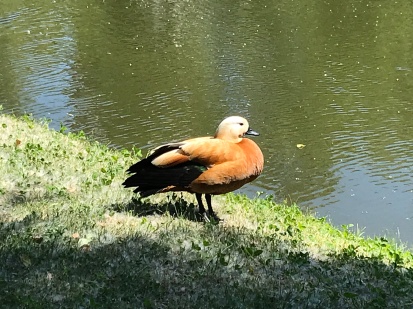 People love their parks here in Moscow, in weekends these get crowded by families with children, dogs running around and people sitting in the grass having picnic. Someone is playing guitar. The row of benches in the shadow of the trees welcomes you to slow down for a while. Gorky park is one of the most popular parks in Moscow. It is known for its beautiful main entrance and the colorful flower beds where admirers gather. But even here you can find som hidden gems, where it is quiet and peaceful. 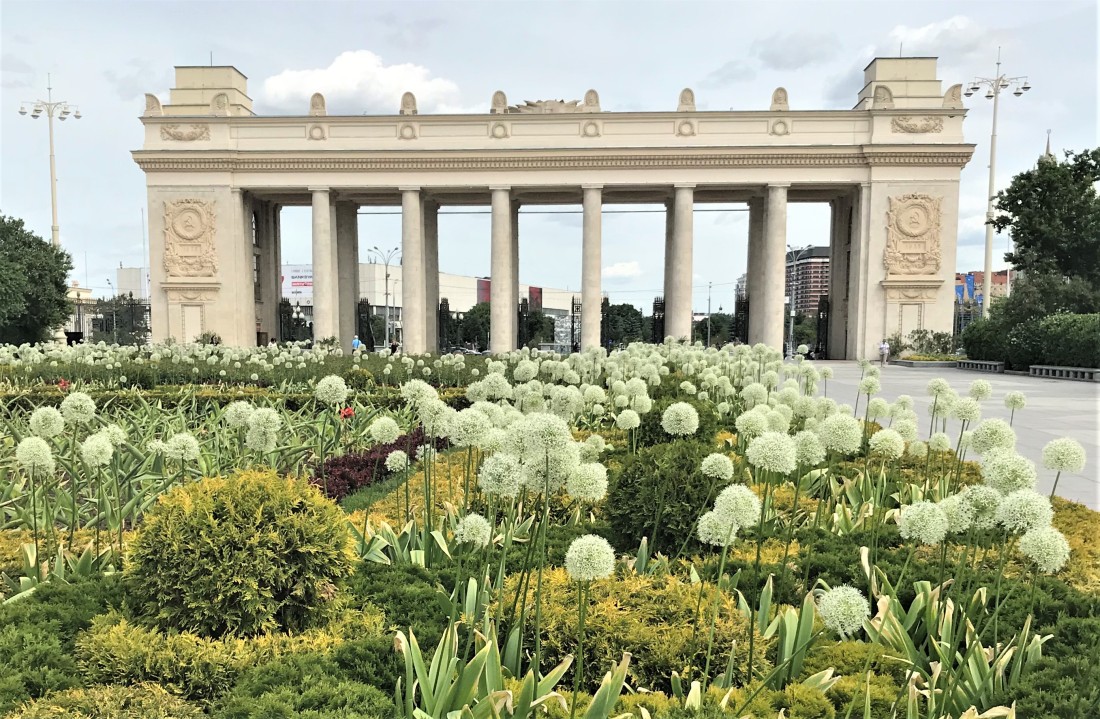 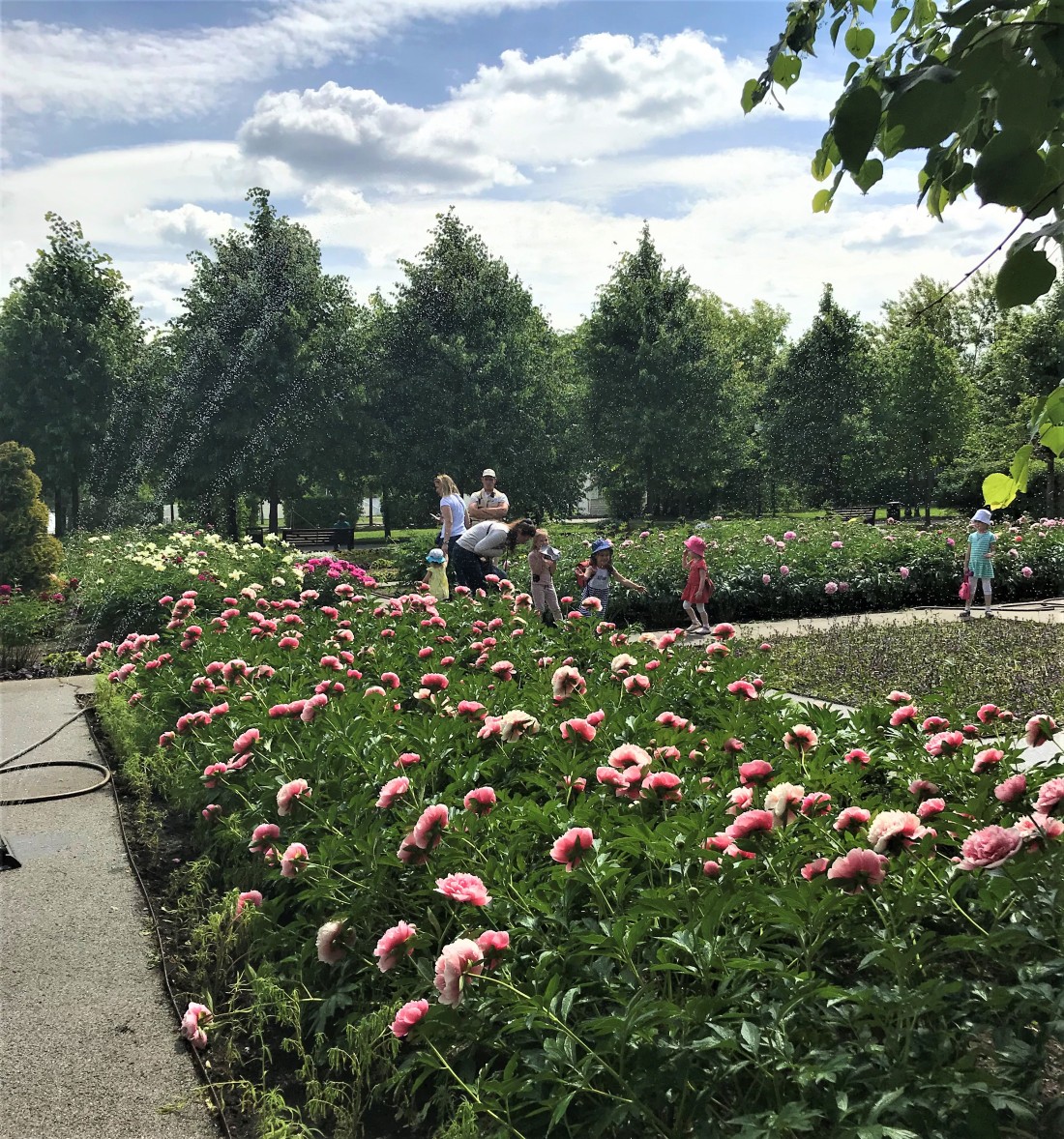 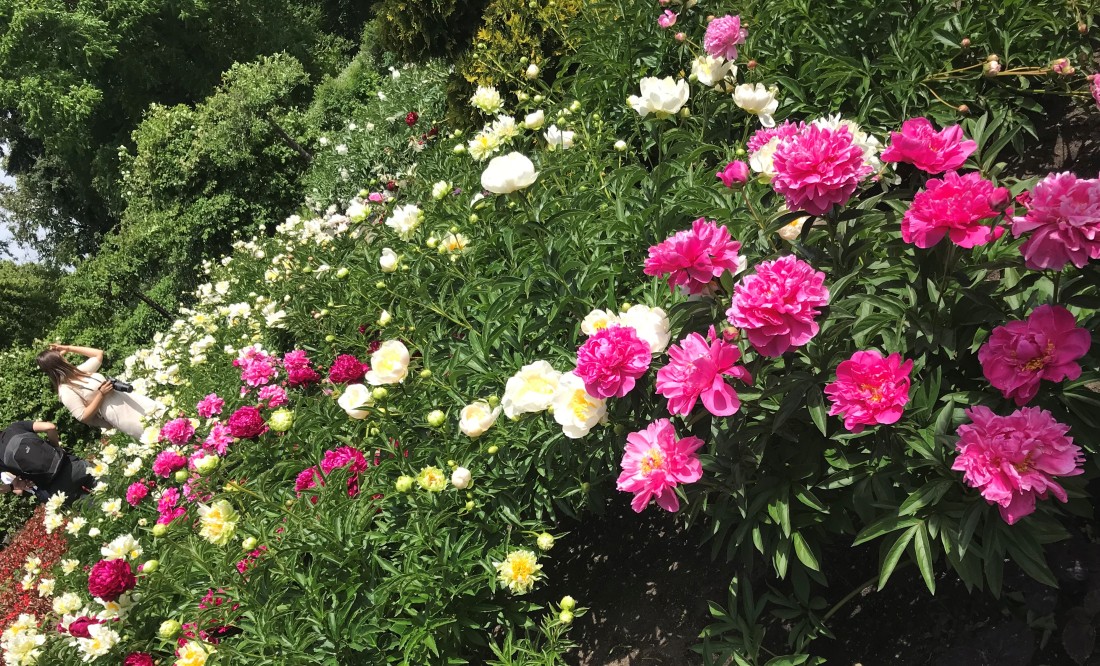 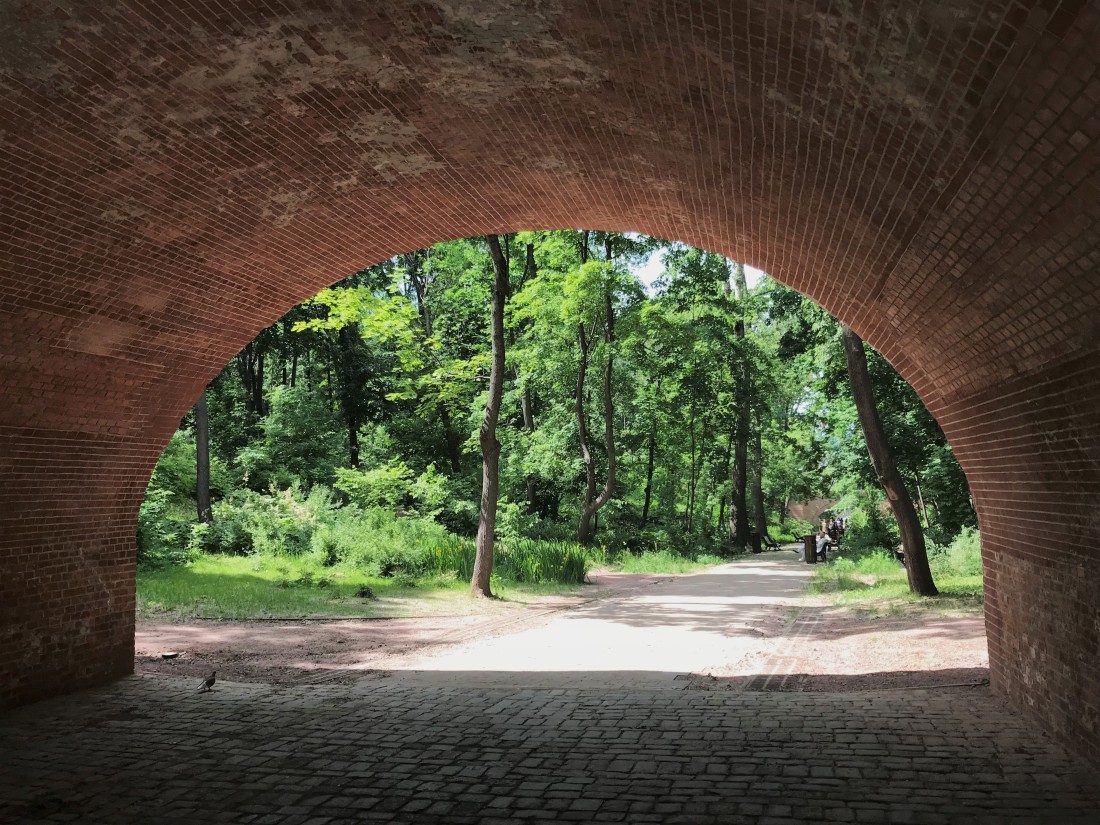 The second time I came to Moscow was in autumn 1993. It was my first business trip to Moscow where me and my controller colleague were gathering the Russian accounting ladys from Thomesto group companies for a course at Ernst & Young’s headquarters. The goal of the course was to implement a new group accounting system in our offices around Russia. However before that could be done we needed to teach our ladies to use computers….

We left Arlanda on Sunday evening and were met at the Sheremetyevo airport by the company’s driver. He was to take us to hotel Ukraine, a huge tower constructed during Stalins government. We were excited to see Moscow, driving closer to the city.  The excitement grew when we realized that something abnormal was going on. The closer we came to our hotel, the messier everything looked! The streets were empty except for loads of trash, broken windows, abandoned vandalized cars and groups of men shouting loud. Our driver was worried but managed to find a way through the blocked roads and park close to the hotel so we could take us in to the lobby. We noticed lots of shields placed in rows in the lobby and lot of men in old style uniforms – probably called in to do their duty for the Russian state. 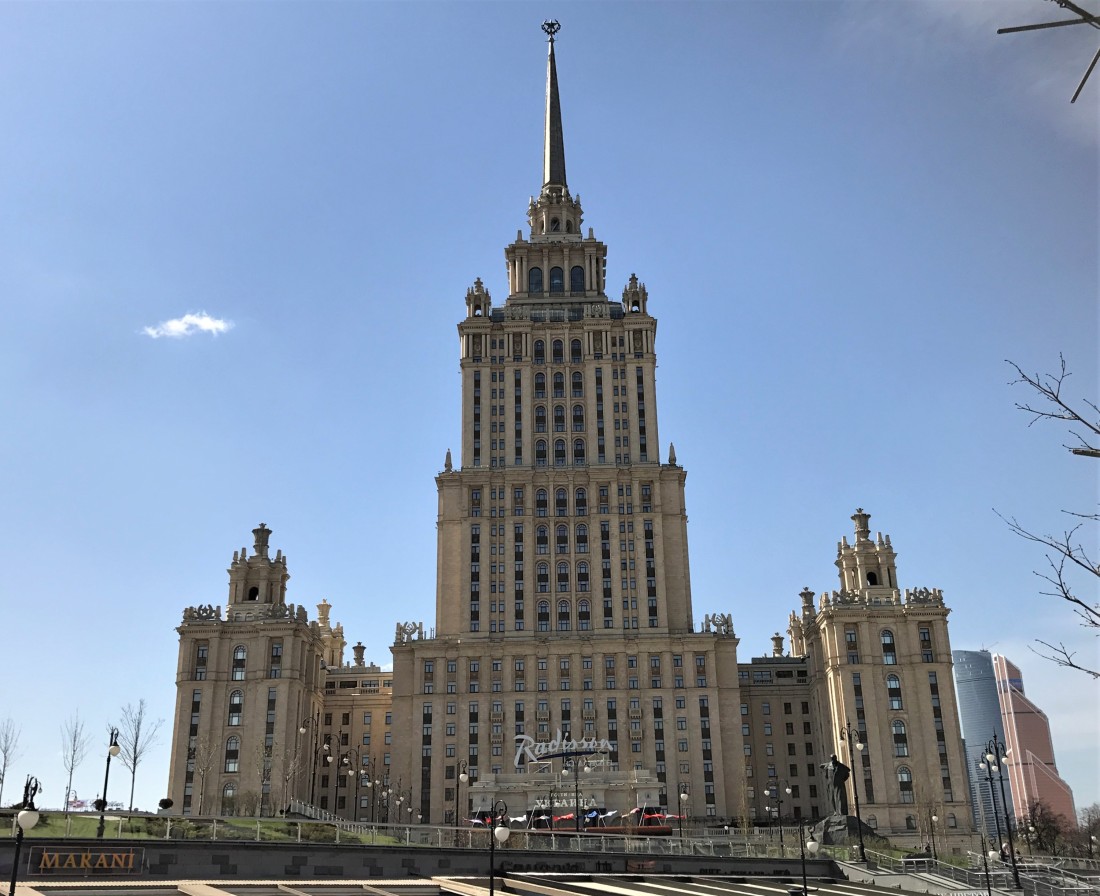 My room was on the 24th floor. From the window I could see the Moscow river floating by and on the other side of the river, opposite to the hotel, the Russian White house, the Parliament, was standing. I switched on the TV. To my surprise I saw the same view from my window as from the TV. The newscaster reported about an uprising against president Jeltsin. Some members of the old parliament (supreme soviet) barricaded themselves in the parliament building and had proclaimed the vice president Alexander Rutskoj a new president. They agitated everybody to take over the TV station Ostankino. 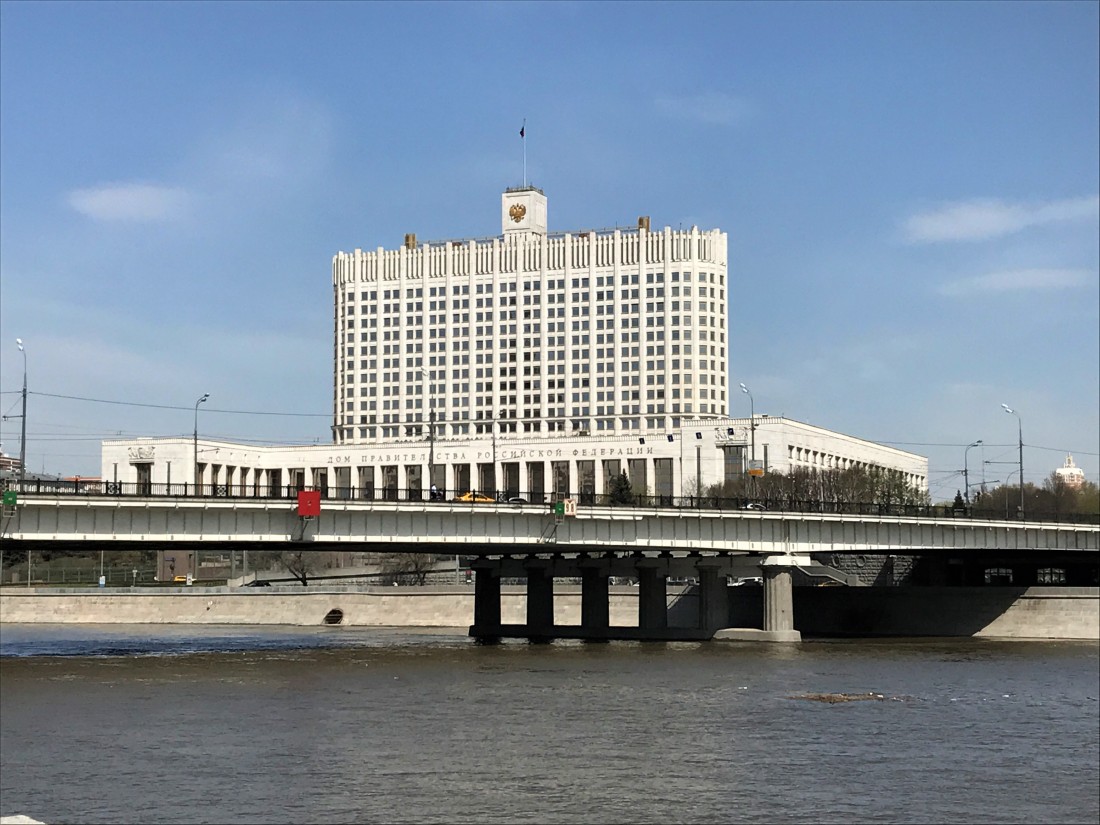 From my hotel room I could see the tower of Ostankino far away. I was following the news, feeling a lot of excitement. Unfortunately there was no film in my camera I brought with me, I had intended to buy a roll at the hotel. I took my laptop and made some notes – I felt I was part of a historical happening. Suddenly the TV sending stopped and the screen turned black. Far away I could see the TV tower lighting up strongly – was it fire? It got dark around the hotel and there was a total silence. I left my window open and tried to get some sleep.

I woke up to a strange sound on the streets below. I jumped up from the bed and looked down – everything was dark grey, just that rattling sound. I fell asleep again and the next time I woke up it was light. Rushing to the window I saw the parliament house totally surrounded by tanks, pointing their pipes towards the white house in the middle. Military helicopters were circulating above the parliament, sending firearms down over the building. Armored wagons were rolling over the big bridge. Jeltsin had sent his troops to hit down the uprising. I was looking down on a battle.

I finally got contact with my colleague who was apparently totally unaware about the situation. Her window pointed to the other direction and she was tired after waiting in the corridor several hours of the night for somebody to open the room door for her – the new Indian door key system didn’t always work. I explained to her that she must go up as there was war going on outside, we needed to have some breakfast and find our driver. We tried to find some place to eat in the total mess in the lobby area. Everything was closed, people were being evacuated because the hotel was within the shooting distance from the white house. The desperados inside the parliament were shooting on people, military and civil, ready to die for the soviet union that Jeltsin was taking down…

We managed to fill our empty stomachs as our kind corridor guard, a fat Russian lady, found some bread, butter and sausage for us in the small kitchen for personnel. We also  found our driver in the chaos of the lobby and left the hotel back way. We joined the row of hurrying people carrying suitcases through an endless maze of corridors and kitchens with benches of stainless steel while the uniformed hotel personnel was standing in every corner to show us the way out. When we finally came out on the backyard the sounds of war, familiar from the movies, hit us. The moment we were passing through the high gate to the main road where the armored wagons still were rolling towards the parliament we heard shooting from a Kalashnikov. Everybody took hide and pressed their backs against the wall – an innate reaction. This was far too much for us, two young girls first time in Moscow…  We couldn’t take it seriously, we laughed hysterically while running with our suitcases after our driver who had parked the car a kilometer away. After taking a passage under the road and coming up on the other side, away from the war, I remember sunshine and birdsong. Even if our employers wanted us to fly back to Stockholm immediately, we checked in to another hotel and joined our accounting ladies who were waiting for us at the Ernst & Young offices. We thought if the rest of the millions of people are staying, why should we leave!

147 people of Moscow died during these two autumn days of 1993. Boris Jeltsin stayed on his post until just hours before the new millennium when he announced about his early resignation – his health was very bad after years of alcohol and heart problems. 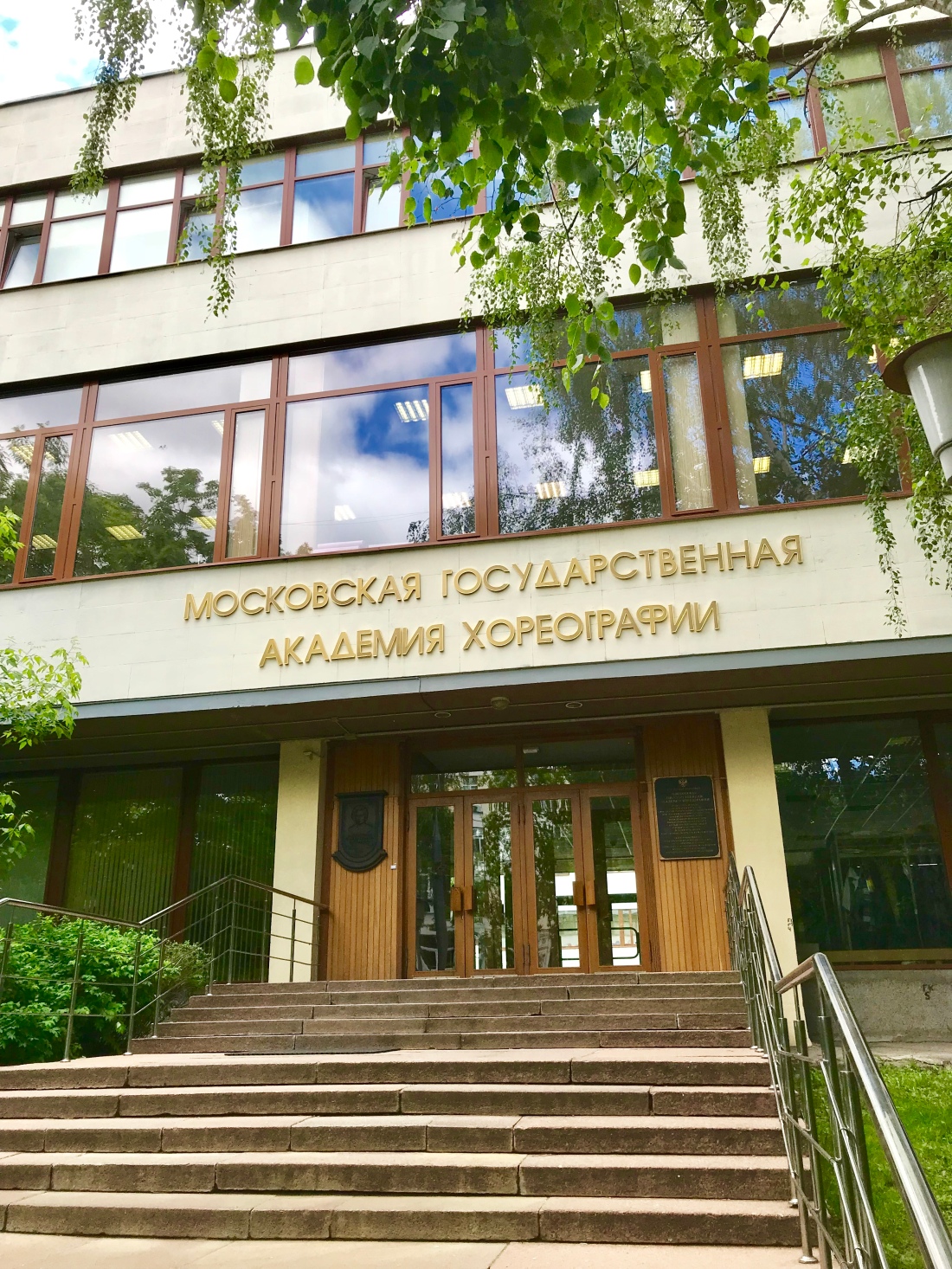 Moscow State Academy of Choreography – also named Bolshoi Ballet Academy – is the reason for my xx visit (I have lost the counting order) this time. My daughter Elsa is completing her second year here as an international ballet trainee. She has been living at the dormitory located on the third floor of the academy building. This is the last month of her stay here at the academy and she feels a bit sad to leave the school and her friends from all over the world. The time here has been an unforgettable experience both ballet-wise and for her personal development. 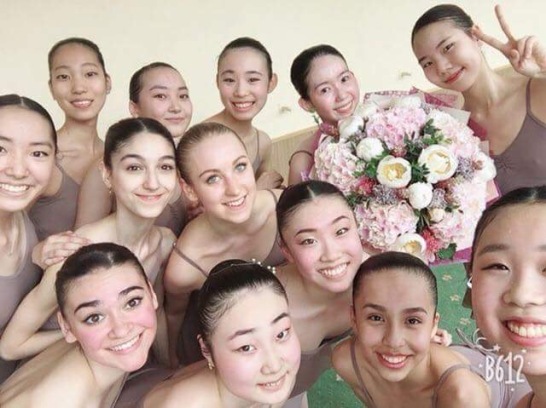 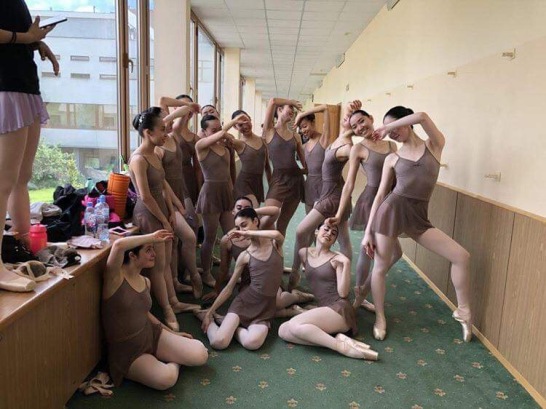 As mother of Elsa, who is loved by the nice ladies of the dorm because she of her kindness and good behavior, I was invited to the small concert held at the dormitory where Elsa was going to play two songs on the piano. After some difficulties to persuade  the guard at the front door I got the permit to follow Elsa to the dormitory. It is really exciting to hang around backstage at one of the most prestigious ballet schools in the world! Long corridors with doors on both sides, marked with names of the pupils, 2 – 4 names at each, Russian, English, Italian, Japanese… Girls and boys in training clothes in every corner and corridor stretching, dancing and rehearsing for the concert.

The concert was opened in a traditional Russian way, the headmaster of the dormitory holding a small speech for the pupils of the 3rd grade soon leaving the school to find a job – not easy for a new professional dancer… The concert was meant for them but they also took part of the acting. The students from different countries showed a variety of mainly funny small acts. The public applauded, enjoyed and laughed – so did I! I caught some small pieces of the show. The princes of various countrys are trying to wake up the sleeping beauty:

Moscow of today is a huge but still pleasant city where you easily can move yourself from one part to another by the metro. The metro is both effective and the stations, especially the old ones, are beautifully decorated. It goes deep under the city and when crowded, you literally search for the light in the end of the tunnel… 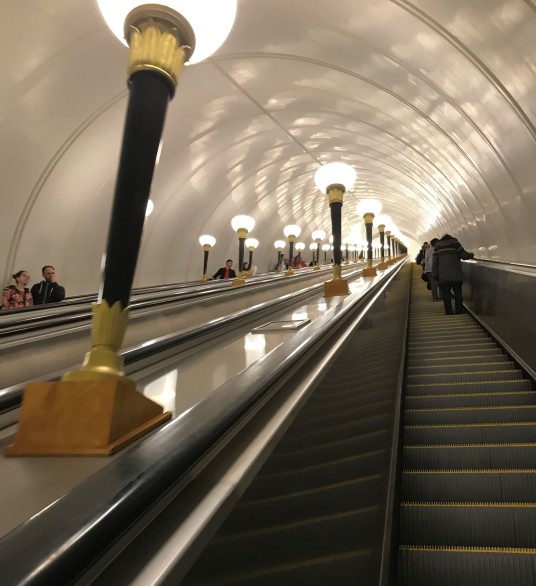 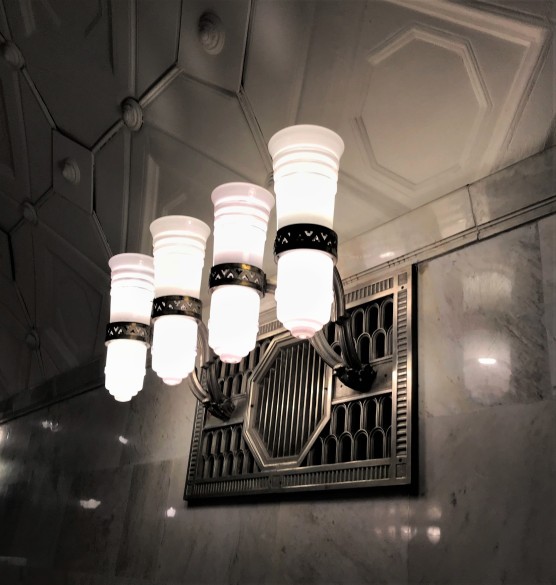 Tomorrow I will leave Moscow for this time, which is the best time to be here – June! People of Moscow are enjoying themselves, their faces are happier and their steps are lighter. The weather is a bit changing but the sun is always there, sometimes just hiding behind the clouds…. 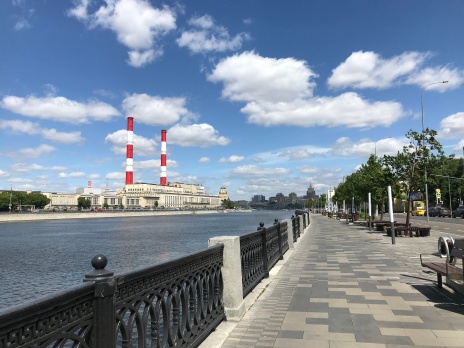 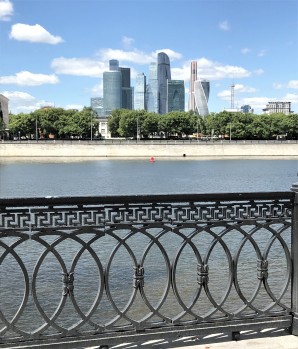 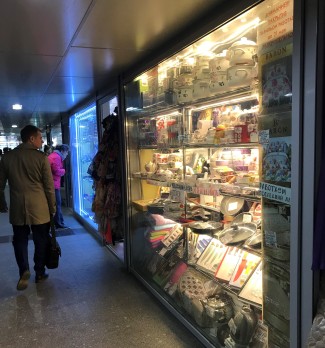 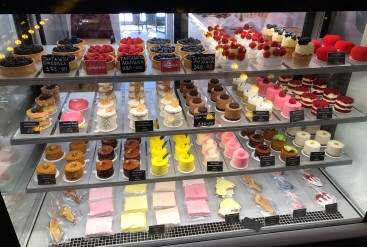 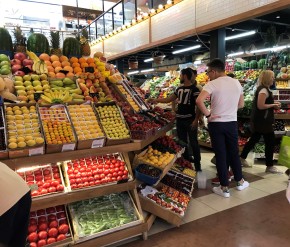 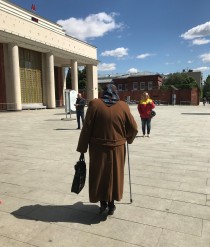 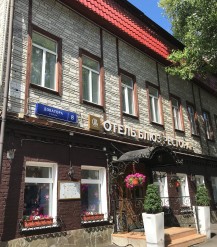 I'm a happy person having a big loving family, both in Estonia, where I was born, and in Sweden where I have been living the last thirty years. As our two girls have moved out me and my husband are looking forward to have a new start in a new country - Spain! Our plan is to build a spacious house where we can enjoy the Spanish life together with our friends and families. View all posts by ehalinda